Menu Search
My Basket
You have no items in your shopping cart.
JustGlobes.uk - The UK's Largest Online Globe Specialist

FREE 1-2 DAY DELIVERY TO MAINLAND UK, OR ORDER BEFORE 3PM AND CHOOSE NEXT WORKING DAY DELIVERY 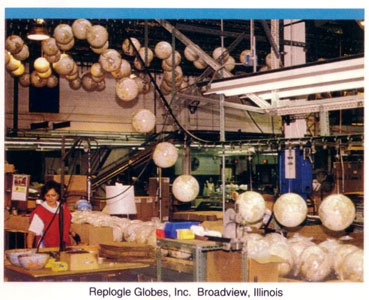 Replogle Globes have been making globes since the 1920's.  Recognized as the world's leading manufacturers of world globes, Replogle World Globes has a well-earned reputation for its constant production and innovation of world globes.
From its humble beginning in a Chicago apartment, Replogle World Globes today is the world’s leader in globe production.  From handcrafted masterpieces in the offices of presidents and dignitaries to classroom models that help students understand their world, their belief in the globe as a source of wonder hasn't changed.

To deliver globes to an ever broader audience.  That was the vision of Luther Replogle in 1930, and this continues to be Replogle's mission to this day.  Replogle World Globes believe that the appeal of a globe is deeper than its value as a learning tool or home accessory.  Luther Replogle knew this from the beginning.  As a school supply salesman, he took a special interest in globes, believing he could successfully market them to a broader audience.

He was right!  What began with hand-assembled globes sold from a Chicago apartment (with maps sourced from England!!!!!!!!, no less) grew into what you might call a global empire, Behind the rallying cry, "A Globe in Every Home, " Replogle World Globes facilitated the globe's migration from the classroom to the living room.  In 1963, Replogle co-founded Scanglobe of Denmark, going on to purchase the globe manufacturer's remaining interest in 1988 and moving its operations to the USA in 2003.

Replogle is the world's leading globe manufacturer, based in a 260,000 square foot facility near Chicago - but some things haven't changed much since 1930.  Many Replogle Globes are still painstakingly hand-made by artisans who have spent the better part of their lives with the company.  This is indicative of a commitment to quality, a commitment to doing things the right way, and, most importantly, a commitment to the globe itself. It is for the above reasons that Replogle World globes that are floorstanding like the Diplomat for example are  simply without equal, the quality of the wooden furniture produced at Replogle World globes is a world away from all other Globe manufacturers.
It's exactly what Luther Replogle had in mind.

In 1930, as 122 million citizens of the United States brace themselves for what will become known as the Great Depression, experienced all over the world. From the US to Germany and the UK. Luther Replogle, along with his wife, Elizabeth, begin assembling globes in their Chicago apartment.  Luther's idea -"A Globe in Every Home" flies in the face of the dwindling economy, not to mention logic itself.

Luther Replogle believed that the globe was too valuable, too beautiful to be forever relegated to classroom duty.  Where he got this idea is anyone's guess.  When Luther Replogle wasn't making sales calls for a school supply company, he spent his time in the Weber Costello plant, watching globe-makers at work, paying particular attention as they pasted hand-cut map gores to molded hemispheres.

Luther Replogle's interest in globes paid off.  And in a constantly changing, seemingly shrinking world, his vision is more relevant today than ever.  In 1930, Luther Replogle thought that a globe might help people make sense of their world.  There were floods in the Mississippi River Delta, Fascism on the rise in Europe, Lindbergh attempting to fly across the Atlantic.  Much was going on.  The world was a big stage.  It still is. Today countries in the middle east, as well as north Korea are a topic of interest in households all over the western world. Because of this globes are more popular now than ever before.

The maps on all Replogle World Globes have nations, colonies, possessions, boundary lines, and place names as officially approved by the United States Government.  Maintenance of the content of these maps requires frequent communication with the U.S. Department of State, the U.S. Board of Geographic Names, the Central Intelligence Agency, and the National Imagery and Mapping Agency.

In addition to these sources, Replogle World Globes communicates with embassies of other nations in Washington D.C. and foreign consulate offices in Chicago, for help with new changes in boundaries and names.
Visit Replogle Globes:  www.replogleglobes.com

Thanks to Replogle Globes for providing the above information.